School Board of Trustees 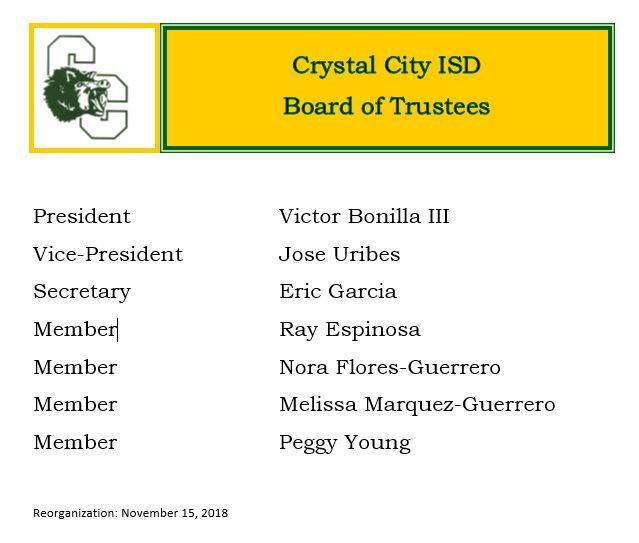 Elections are held every 2 years in November.
Board members serve 4-year terms.
Four positions will be open for the November 2020 elections.

SUBCHAPTER A. ELIGIBILITY FOR PUBLIC OFFICE

(a)  To be eligible to be a candidate for, or elected or appointed to, a public elective office in this state, a person must:

(2)  be 18 years of age or older on the first day of the term to be filled at the election or on the date of appointment, as applicable;

(3)  have not been determined by a final judgment of a court exercising probate jurisdiction to be:

(A)  totally mentally incapacitated; or

(B)  partially mentally incapacitated without the right to vote;

(4)  have not been finally convicted of a felony from which the person has not been pardoned or otherwise released from the resulting disabilities;

(5)  have resided continuously in the state for 12 months and in the territory from which the office is elected for six months immediately preceding the following date:

(A)  for a candidate whose name is to appear on a general primary election ballot, the date of the regular filing deadline for a candidate's application for a place on the ballot;

(B)  for an independent candidate, the date of the regular filing deadline for a candidate's application for a place on the ballot;

(C)  for a write-in candidate, the date of the election at which the candidate's name is written in;

(D)  for a party nominee who is nominated by any method other than by primary election, the date the nomination is made; and

(E)  for an appointee to an office, the date the appointment is made;

(6)  on the date described by Subdivision (5), be registered to vote in the territory from which the office is elected; and

(7)  satisfy any other eligibility requirements prescribed by law for the office.

Form, Content, and Procedure:
An application for a place on the ballot must be in writing; signed, sworn to by the candidate before a person authorized to administer an oath, and dated; timely filed with the district's filing authority (Superintendent's secretary), and contain information about the candidate.
First Day to File for Place on General Ballot: Saturday, July 18, 2020
Last Day to File for Place on General Ballot:  Monday, August 17, 2020, at 5:00 pm
Last Day to File a Declaration for Write-In Candidacy: Friday, August 21, 2020
Last Day to File Certificate of Withdrawal: Monday, August 24, 2020
Applications Packets available at 613 W. Zavala St, Crystal City, Texas

Notice of Deadline to File Application for Place on the Ballot

Notice of Drawing for Place on Ballot